Click here to close Hello! We notice that you are using Internet Explorer, which is not supported by Echinobase and may cause the site to display incorrectly. We suggest using a current version of Chrome, FireFox, or Safari.
Echinobase

Browse genomes and community contributed datasets. If you find a dataset missing or have a new dataset to contribute for a supported genome please contact us! 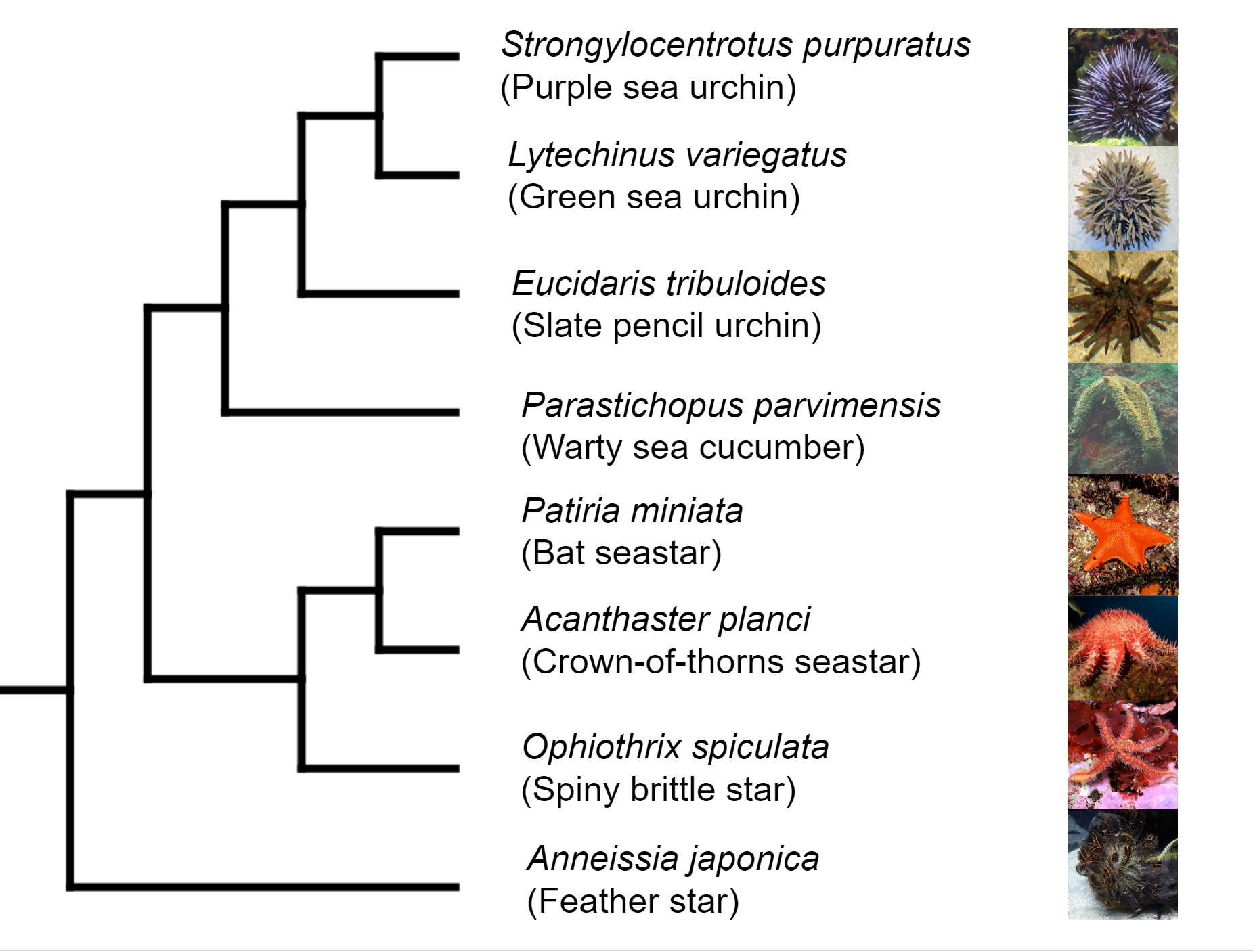 Echinoderms are model organisms for studying embryo development and regeneration due to many unique features including: 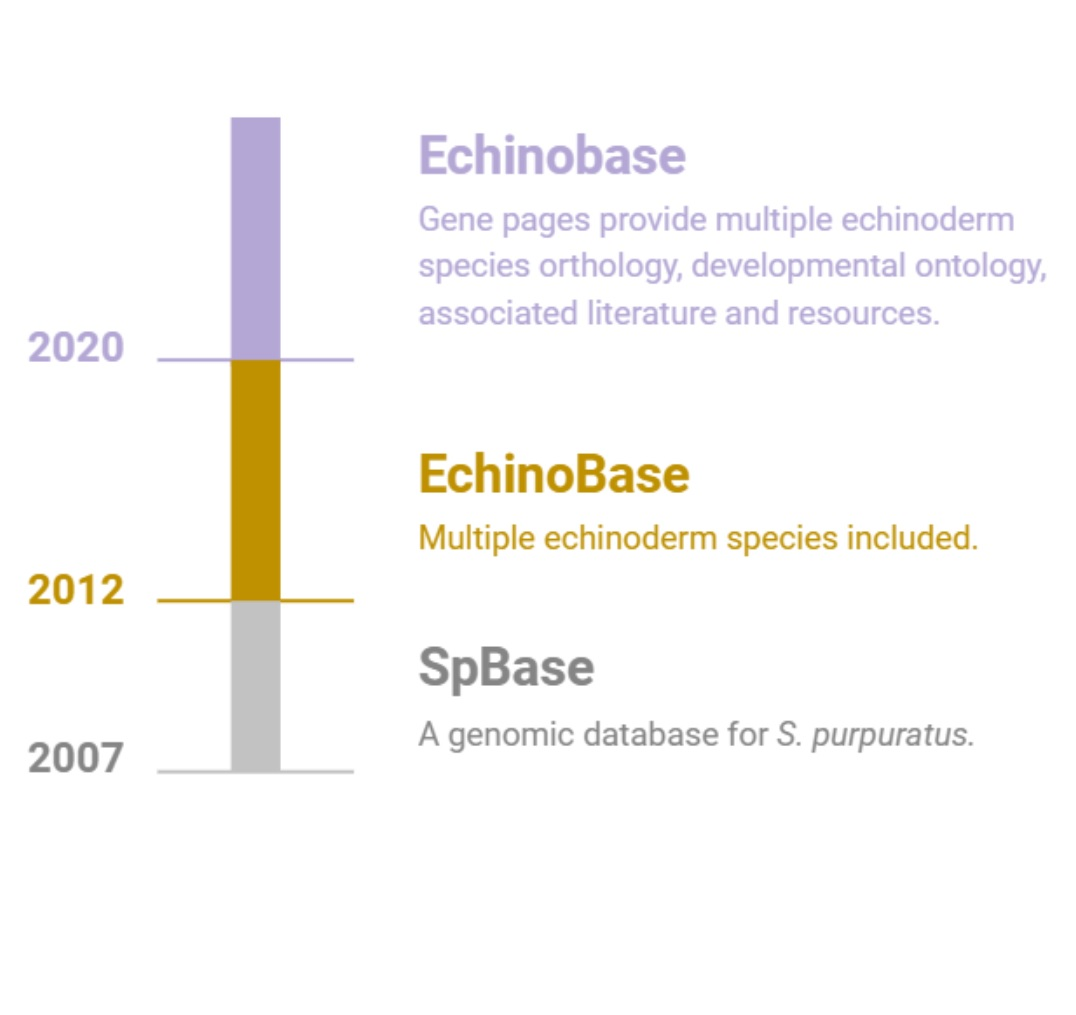 Echinobase supports the international research community by providing a centralized, integrated and easy to use web based resource to access the diverse and rich, functional genomics data of echinoderm species.
Echinobase is organized around the GENEPAGE which displays information about genes, orthology, and links to research papers. The gene models of echinoderm species are associated with the genome sequence using the genome browser, JBrowse. Temporal developmental gene expression data will be displayed when available, and spatial cell type information will be associated using the Echinoderm Anatomical Ontology (ECAO).

Echinobase provides a critical data sharing infrastructure for other NIH-funded projects. In addition to our primary goal of supporting echinoderm researchers, Echinobase enhances the availability and visibility of echinoderm data to the broader biomedical research community.

S. purpuratus
The purple sea urchin, Strongylocentrotus purpuratus, lives in lower intertidal and nearshore subtidal communities along the eastern edge of the Pacific Ocean extending from Ensenada, Mexico to British Columbia, Canada. Morphological development of S. purpuratus from embryo to adult has been studied for over 100 years and recent decades have added genetic and genomic data to our knowledge of this model organism.

The substantially improved current release of the purple sea urchin genome assembly (Spur5.0) is sixth in the series.

Learn more about the genomics of the purple sea urchin.

P. miniata
The bat star, Patiria miniata, (formerly called Asterina miniata) is a common sea star found along the Pacific coastline of North America from southern Alaska to the Gulf of California, Mexico, in intertidal and subtidal locations to depths of 300m. Bat stars typically have 5 arms but range from 3 to 8 and can be red, orange, brown, yellow, blue, pink, green, and intermediate color and adults are about 8 inches across. P. miniata reproduce by broadcast spawning and embryos hatch into planktonic larvae and later metamorphose into pentaradial juveniles which develop into young sea stars with stubby arms.

The current version, v3.0, of the assembly is fully supported at Echinobase.

Learn more about the genomics of the bat star.

L. variegatus
Lytechinus variegatus (Lamarck, 1816) is known as the green sea urchin or variegated sea urchin. It has many color morphs including white, green, purple, red, or pink or a combination of those colors. Multiple subspecies inhabit distinct geographical territories of the western Atlantic tropics ranging from North Carolina south to the Carribean, Gulf of Mexico and northern Brazil. The planktonic larvae are known as pluteus larvae that metamorphose to juvenile urchins.

The L. variegatus v3.0 genome is the first echinoderm assembly with chromosomal resolution.

Learn more about the genomics of the green sea urchin.

A. planci
The crown-of-thorns seastar (COTS), Acanthaster planci, is is named for the spines that cover the top of its large body and multiple arms. A. planci lives in Indo-Pacific waters and preys upon corals. Outbreaks where large numbers of COTS aggregate can decimate coral reefs. Due to their destructive nature the genome was sequenced in the search for biocontrol strategies. The current version of the A. planci genome, v1.0, is available on Echinobase.

Learn more about the genomics of the crown-of-thorns seastar.

Echinoderms are marine organisms that when harvested from the wild, can live in aquariums and embryo and larval development has been studied for over 100 years. Echinoderm eggs are fertilized externally and embryos and larvae are transparent, enabling detailed descriptions of the structure and timing of development.

The variation and comparison of developmental patterns of related species is used to improve understanding of these vital processes and their evolution in echinoderms and deuterostomes. Echinoderms are models for studies of skeletogenesis and regeneration.

The Echinoderm Anatomical Ontology (ECAO) provides standardized terms for developmental stages for S. purpuratus, and is being expanded to include additional echinoderm species. 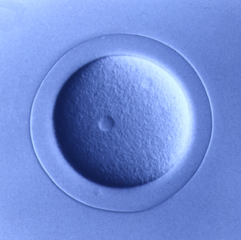 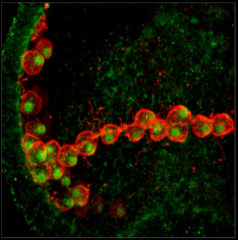 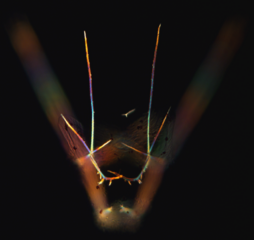 For studies of regulatory sequences BAC Libraries are available. Refer to the BAC Table for those that can been identified using BAC-ENDs and the genome browser or screen the BAC library for your gene of interest. An in-frame fusion of a reporter gene can be engineered into the locus of interest by recombineering to assess gene expression and putative regulatory sequences.

Echinobase automatically searches the scientific literature and collects articles related to echinoderms. Users can come to the site to access currently available published research in one centralized location. Papers are manually curated to link genomic information to protocols and reagents for future studies.

Echinobase has collected contact information for members of the community and is working to maintain a current, updated web interface, for accessing and querying genomes, transcriptomes, chromatin structure, regulation and expression of genes during development with documentation, and supporting information, an image database, and robust ontologies.

Community members are welcomed to contribute to EchinoWiki with protocols, reagents and data, and to submit new genomes for partial or full support.

Genomes are eligible for partial support when assembly and annotation are publicly available through Genbank. The assemblies, annotations, and functional data tracks (GFF files) will be available on the JBrowse genome browser and can be searched via BLAST.

The Echinobase PIs and SAB members will decide the new species for full support and integration into the database as gene pages with complete functionality, including gene names and symbols, synonyms, literature, orthology, and developmental gene expression display. This process will only be possible when the genome has been fully processed by the NCBI annotation pipeline. Suggestions for priority species are always welcome.